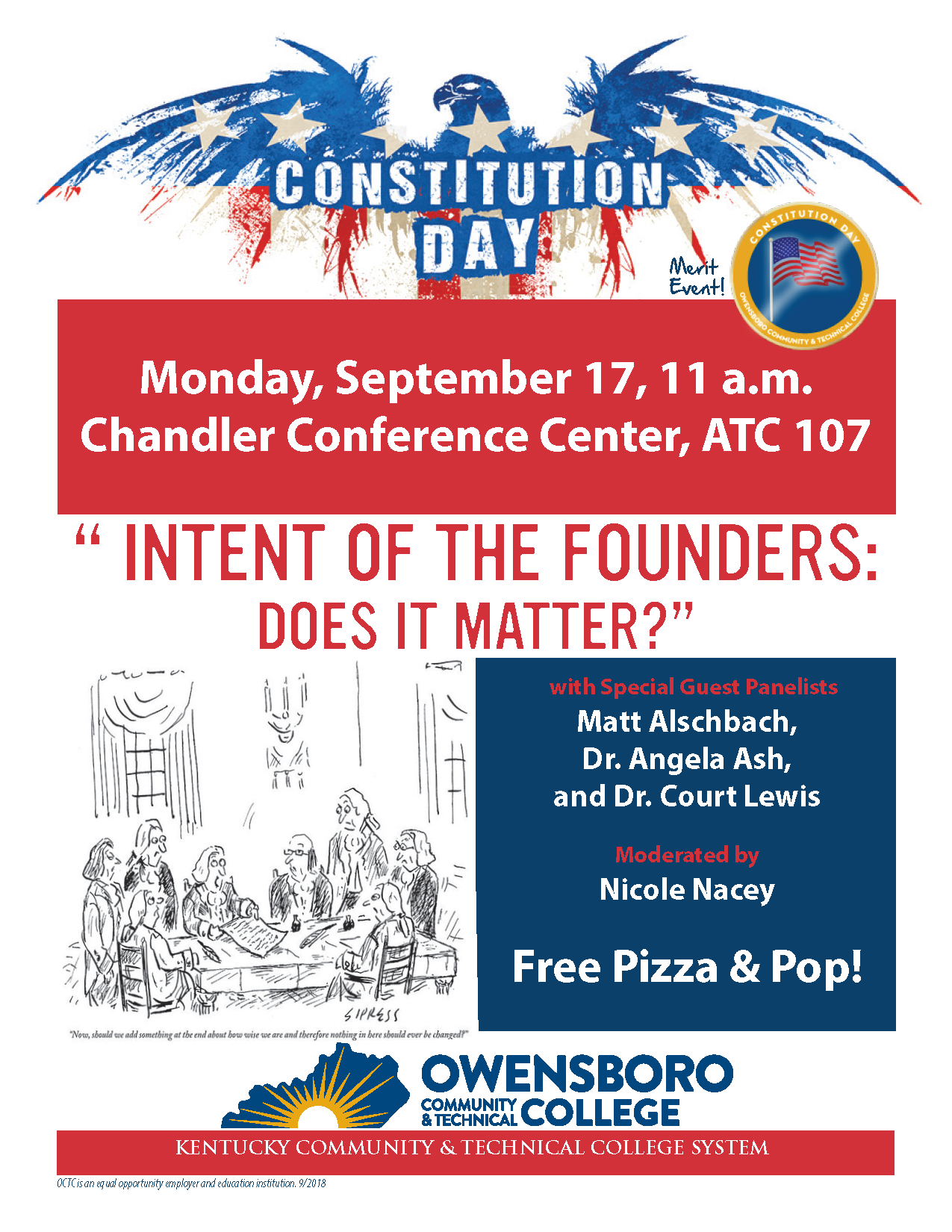 On Monday, September 17, 2018, Owensboro Community & Technical College (OCTC) will celebrate Constitution Day with a discussion titled "Intent of the Founders: Does It Matter?" The panel discussion will be by moderated by, Nicole Nacey, OCTC Political Science Faculty. The panel will be made up of Matt Alschbach, Dr. Angela Ash, and Dr. Court Lewis.

Nacey is an OCTC alumnus, teaches Political Science, and has worked in the OCTC Business Office for over ten years. Nacey earned a Bachelor's in Business Administration and a Master's in Public Administration from Western Kentucky University.

Alschbach is an Associate Professor, he earned a master's degree in history from San Diego State University, and a bachelor's degree in history from California State University San Marcos. He has presented his research at numerous conferences and events, discussing topics such as Eleanor Roosevelt, Muhammad Ali, the Salem witch trials, temperance and prohibition, the U.S. Constitution, and the historic role of women as legitimate practitioners of medicine. He is a strong advocate for diversity and inclusion, serving as faculty advisor for Students Aligned for Equality at OCTC.

Ash is an OCTC alumnus, a veteran of the U.S. Navy, teaches in the Department of History and is an Associate Professor. Ash earned her undergraduate degree in history from Brescia University, her master's degree in History from the University of Louisville, and a doctoral degree from Western Kentucky University. She recently participated in the Fulbright Hayes Seminar Abroad program that traveled to Poland.

Lewis is an Associate Professor, received his Ph.D. from the University of Tennessee, and is Program Coordinator of Philosophy and Religious Studies at OCTC. He is the author of Repentance and the Right to Forgiveness, co-author of Medical Ethics: The 16 Week Consult, and has contributed to several journals and edited collections.

On Constitution Day, we recognize the anniversary of the nation's constitution and the efforts and responsibilities of all citizens in sustaining the constitution. In the summer of 1787, delegates convened in Philadelphia to create "a more perfect union" and construct the country's constitution. They worked to develop a framework that would provide balance and freedom, considering national and state interests, as well as individual human rights. The delegates signed the Constitution of the United States on September 17, 1787. By June 21, 1788, the Constitution was ratified, having been approved by nine of the 13 states.

In 1940 Congress created "I Am an American Day" to be celebrated on the third Sunday in May. On February 29, 1952, President Harry Truman signed into law "Citizenship Day." It was established to replace "I Am an American Day." On August 2, 1956, Congress requested that the President proclaim the week beginning September 17 and ending September 23 of each year as "Constitution Week." One additional change was made to the event when a federal law enacted in December 2004 designated September 17 as "Constitution Day and Citizenship Day."

OCTC President Dr. Scott Williams commented, "We hope that the topic of this Constitution Day encourages discussion and deliberation among the students, faculty, and staff and that community members feel free to join us."

In addition, a book display about the U.S. Constitution is available in the library, and a limited number of free Constitution booklets will be on hand. The event is free and open to faculty, staff, students and the general public. The event will begin at 11 a.m. in the Chandler Conference Center, located in the Advanced Technology Center of OCTC's Main Campus at 4800 New Hartford Road.